The town of Orland was established in 1875. During the early years law enforcement duties fell to volunteer “Night Watchmen” who provided business security checks and made arrests when necessary. Among the names listed in the early city archives as being “Night Watchmen” are ”Long John” Hostetter, Walter Bakmus, and “Sparks” Green.

On November 4, 1909 the City of Orland incorporated and the first “City Marshall,” Alexander Cotton “Alec” Lake was elected in a close election winning the position by just 6 votes over Joe Sloane and full time, professional law enforcement came to Orland.

The original City Jail was located on what is now 8th Street. However, in a tragic fire on November 25, 1887 the jail burned to the ground killing an inmate housed in the facility. A newer, poured in place, concrete jail was constructed and is still standing today.

Over the past 100 years the Orland Police Department has continued to grow. Names like Ben Kranig (later elected Glenn County Sheriff), and John Moranville are still remembered fondly by Orland’s long time residents. In the last quarter of a century the following individuals have distinguished themselves serving as Chiefs of Police. Each has elevated the department to new heights and each is a story unto themselves.

I am both humbled and honored to add my name to this distinguished list. 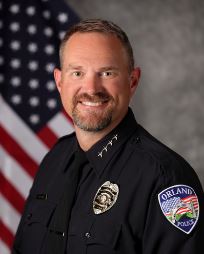